60 replies to this topic

A real estate friend of mine tells me the Berry Theater on Hemphill is under contract to be sold.  Has anyone else heard this?  If so, any word on what the new owners plan for it?  Is it designated historical?  If someone is buying it to do any kind of restoration, this could be huge for the neighborhood.

I don't think it has a historic designation...the building next door that says Mary's Beauty Salon is for sale too...don't know if that is under contract as well.

You are correct.  There is no historic designation at all on any of the properties on that block.

I wonder if the new owner plans to keep the structure or redevelop the site.

I don't know, so I will keep my ear to the ground and I will let all of you know if I find out something.

I think this building is one of the few existing "essential" structures that could act as as a nexus for an "urban village" at this location.

Man every time I worked at 10's just south of that theater on Hemphill, I always thought that would be such a cool place if they restored it and maybe played some indie films or something. I have never been inside, but old theaters are awesome! If they come up with some public use like indie films, it could bring a lot of traffic into that area.  Right now I travel 8 miles to get to any kind of urban culture (Fairmount).  If I could go roughly half that for similar atmosphere, I would do it.  It could also raise real estate values if there was a major redevelopment/restoration of the theater.  You gotta start somewhere.

And as much as we all grouse about it, between the Wal-Mart and a significant investment in the Berry, you could potentially point to Hemphill Heights as a rising star neighborhood.

Very excited about the possibilities here.  Hope they save it and restore it.

Since moving to Shaw-Clarke in 2003, I have spent a lot of time imagining and conceptualizing a new and improved Berry/Hemphill intersection.

Travis Avenue Baptist Church is developing nicely.  The Wal-Mart ruffled feathers (including mine) but at the very least has raised the visibility of the area and is contributing to the tax base.

I think it is time for something new at the NW corner of Berry and Hemphill.

Except for the sign, I don't see any architectural or design value in the building.

My dream for that corner is the sign to be salvaged for a new mixed-use development called The Berry.

It would have mid- to upscale living units, and retail on the ground, including everyday services and eateries.  (I am tired of "urban villages" which only offer entertainment.)

The layout and retail available would encourage foot traffic from the neighborhood, and from the 4,000 or so members or Travis Avenue Baptist Church who enter the neighborhood twice a week.

Maybe the building isn't demolished, but the theater restored and the building expanded to what I've described above.

As cool as an indie theater would be, I don't see how - on its own - it would serve the needs of the neighborhood.  Restoring it as part of a larger development would be more ideal.

Here's a commercial listing (PDF) for space for lease available December 2015. It appears as if this construction would be where the theater stands today, presumably the developer of this will demolish the building...

Has anyone heard more?

Ugh, yeah.... the theater is clearly in the development area.

Is this not just a remodeling of the existing gas station/strip mall building at the corner, next to the theater?  It doesn't appear from the site plan in that image that the theater is involved in any way.

On further review, you may be right. In the pdf, the red outline showing "SITE" is a thick line that runs right over the theater. If the inside of the box is the site (as opposed to the outside), the theater may be okay.

Yeah, I think the red box is just very vague/approximate.  Looking at the site plan, the building seems to match up with the strip mall, as do the curb cuts and such.  And the site plan ends at the back of the strip mall, beyond which is a vacant lot and then the Berry.

I'm really sure Kevin is correct. The orientation of the red outline on the location map doesn't even match what the site plan shows. The property is maybe 100'x150' judging by the parking and by what most lots in that area were originally drawn up as. Looking at the TAD info, the theater is on Lots 9 and 10, this project is on lots 11 &12.

It is amazing how much attention the Lakewood Theater in East Dallas has received recently as developers seek to change that building. The community around these older theaters in Fort Worth really need to get together and work to preserve them as reminders of the past and as gathering spots for the future.

The problem with Berry is that it is not a pretty building.

The Lakewood also has a huge advantage in that it was still in operation not all that long ago.

JBB, you are correct.  The Lakewood Theater was still in operation a short time ago.  Austin, the Berry Theater may not be very pretty on the outside by day, but it must have looked pretty nice at night, since the entire facade shows evidence of neon tubing over most of the facade.  I bet it looked pretty good after dark.

It is amazing how much attention the Lakewood Theater in East Dallas has received recently as developers seek to change that building. The community around these older theaters in Fort Worth really need to get together and work to preserve them as reminders of the past and as gathering spots for the future.

Now that Leon Bridges is rolling in the dough with his Columbia contract, it'd be cool if he fixed up the Grand Theater just off Rosedale, the one he used in his video.

The problem with Berry is that it is not a pretty building.

Eye of the beholder.  It could be awesome.

*Could* be, but at what price? Maybe someone with very deep pockets will get a wild hair and decide to restore The Berry. I've been talking to a friend who is an investor, and he indicated that the property is considered risky.

That is a very nice rendering! Hopefully businesses other than insurance and payday lenders will occupy. (Sorry to be negative nellie, but I've seen way too many of those types around Berry/Hemphill in the last decade).

At any rate, it will certainly be better than the abandoned Citgo.

*Hopefully businesses other than insurance and payday lenders will occupy. (Sorry to be negative nellie, but I've seen way too many of those types around Berry/Hemphill in the last decade).

At some point people will realize that the Fairmount gentrification is spilling over into adjacent neighborhoods and will take notice.

It looks like the attached restaurant to the north has had permits filed for demolition. Hope the demolition crew is careful where the swing the wrecking ball...

This always scares me when there is a building scheduled for demolition next to an unprotected historic one.  Here's one of my old photographs of the Berry Theater with part of the attached doomed building next to it.

The attached building is gone. Theater still there. 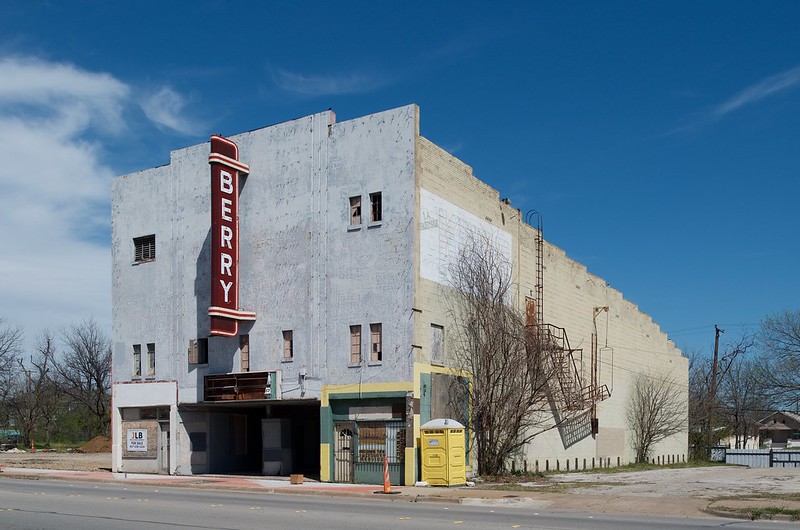 A Berry good day by Dave Matthews, on Flickr

Possible activity with the theater:

Residential it may very well become, but the Fort Worth Weekly article doesn't rule out a mixed-used development. 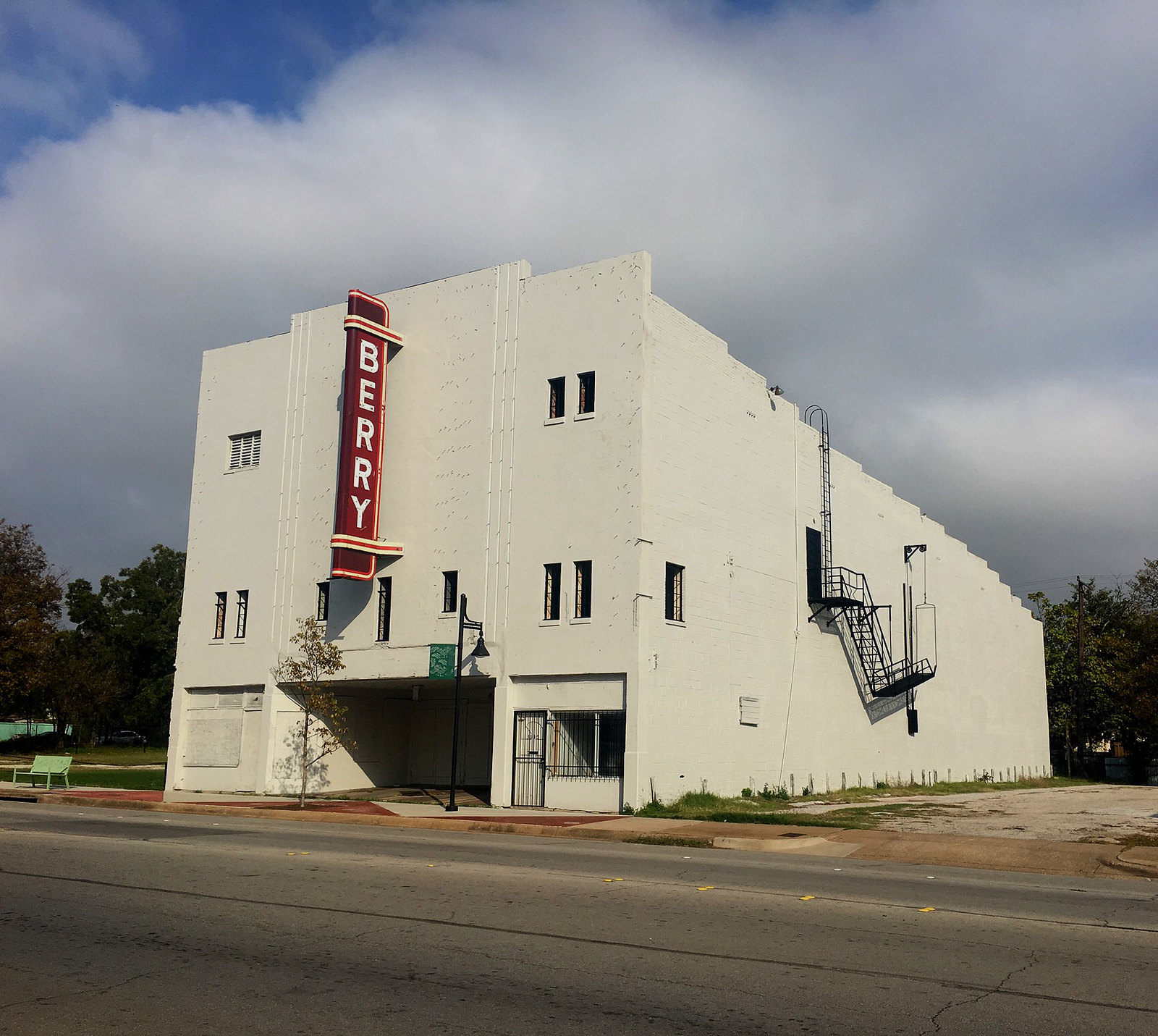 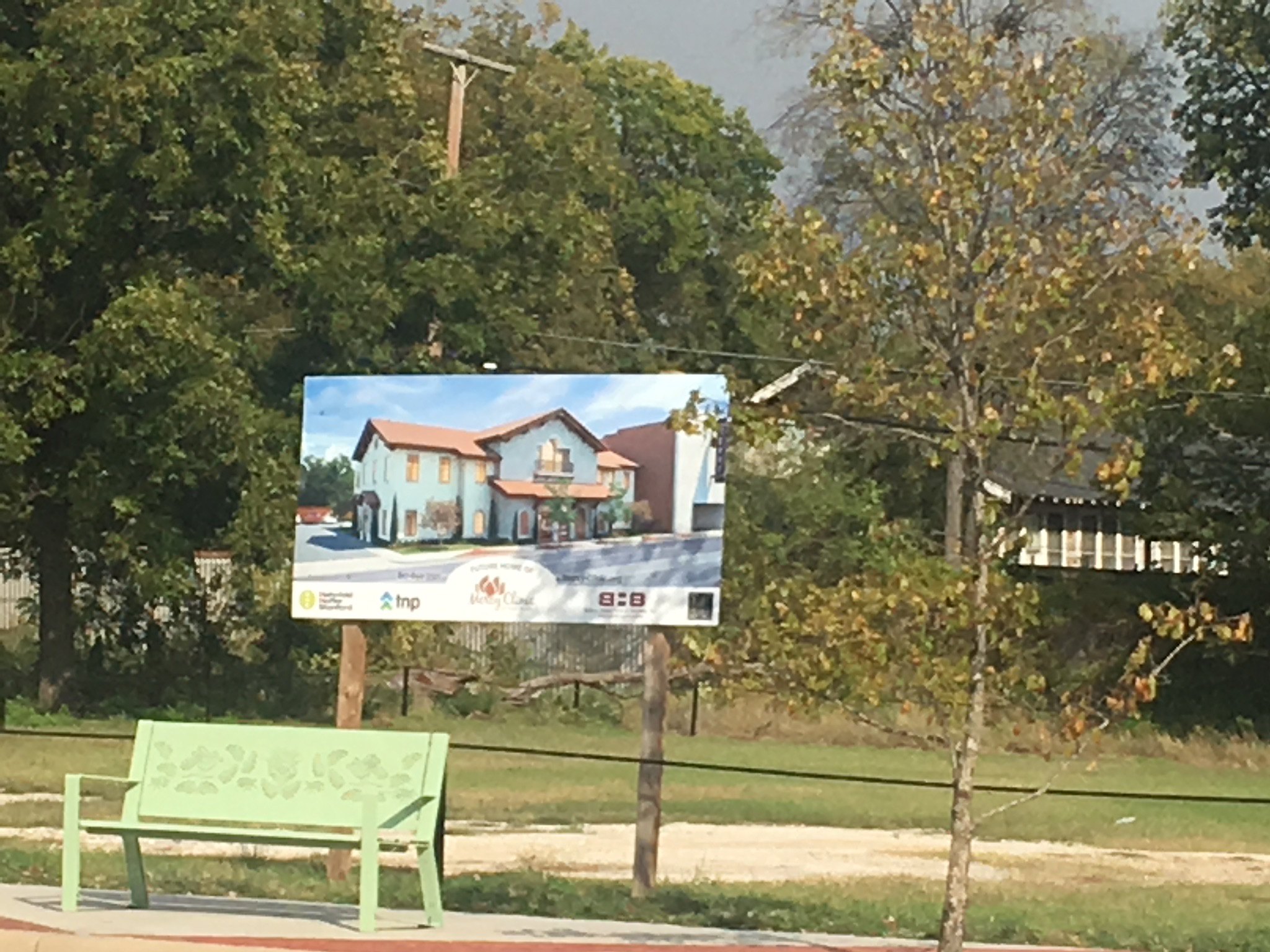 The Berry Theater is looking quite a lot better with some fresh paint. I also snapped a picture of the sign next door (the lot to the North of the theater) which has a rendering of a Spanish villa style building. It's hard to read in the pic, but the sign says "Mercy Clinic" on the bottom.

I believe that Travis Ave. Baptist Church is developing the property next door and that the "Mercy Clinic" will be a part of their outreach program.

I'm surprised Travis Avenue hasn't bought the theater. Seems like it could be a great building for youth and/or college ministry.

That's... not at all what I was expecting.

Photos in the sale link.

Rough, but not impossible....I'm seeing a concert venue. #fingerscrossed

Among the drawbacks that I see for BerryTheater is its relative isolation.   Similar theaters, such as the Isis and the "mothballed" Hollywood, have more favorable locations and therefore better odds for becoming a success.

Nothing other than location about Berry,  but I wish that the money being used for the Berry Theater was instead being used at either the Isis or the Hollywood.

Since we have so few of these neighborhood single screen theaters left, I'm all for preservation of every one of them.  It also appears that the Berry is in better condition than the New Isis.

....It also appears that the Berry is in better condition than the New Isis.

Well that is the truth.

IT looks as though it been struck by tornado, BT is in so much better condition than IT;  but the HT,  even taking in account of the hibernation, its practically ready to go and simply needs  a comparatively minimal investment among the three.

Rename, the difference between the Hollywood and the other theaters is that the only renovations done to the Hollywood after it closed were the conversion to a bank and the conversion to the parking garage.  It also helped that the group that restored the building and converted it into apartments had a track record in preservation.  The owners of the New Isis and the Berry Theater didn't really care about the buildings and they did not maintain them after the theaters closed.

When I lived in New Orleans for awhile I lived two doors down from the last single-screen theater in the state, the Prytania Theater. It was a true gem. I loved having it so nearby (even if that often meant their patrons would park on our residential street), it was almost like an extension of my living room. I sure wish we had similar offerings.

A remodel permit has been filed for the theater,

The listed use on Fort Worth's website is "Meeting hall"

A remodel permit has been filed for the theater,

The listed use on Fort Worth's website is "Meeting hall"

A quick Google search shows that Troy Kunkel lives there and there are several construction-related businesses incorporated at that address.

Anyone know anything about Troy?

Back to Historic Buildings and Preservation

Also tagged with one or more of these keywords: South Hemphill Heights

0 user(s) are reading this topic