2 replies to this topic

So on a whim and while I still have time to do this, I decided to update my thoughts on a Transit District for the barren concrete strips of land that make up the south east side of downtown.

Of course, everything in white represents something that already exists that is of significance.
Everything in red is either from my ideas or a planned/under construction development.
That green strip is an idea for either a small park or plaza that I'll get into in a second.
And of course, the realistic Omni and Convention Center (with modified expansion that's planned) are just there for reference points. 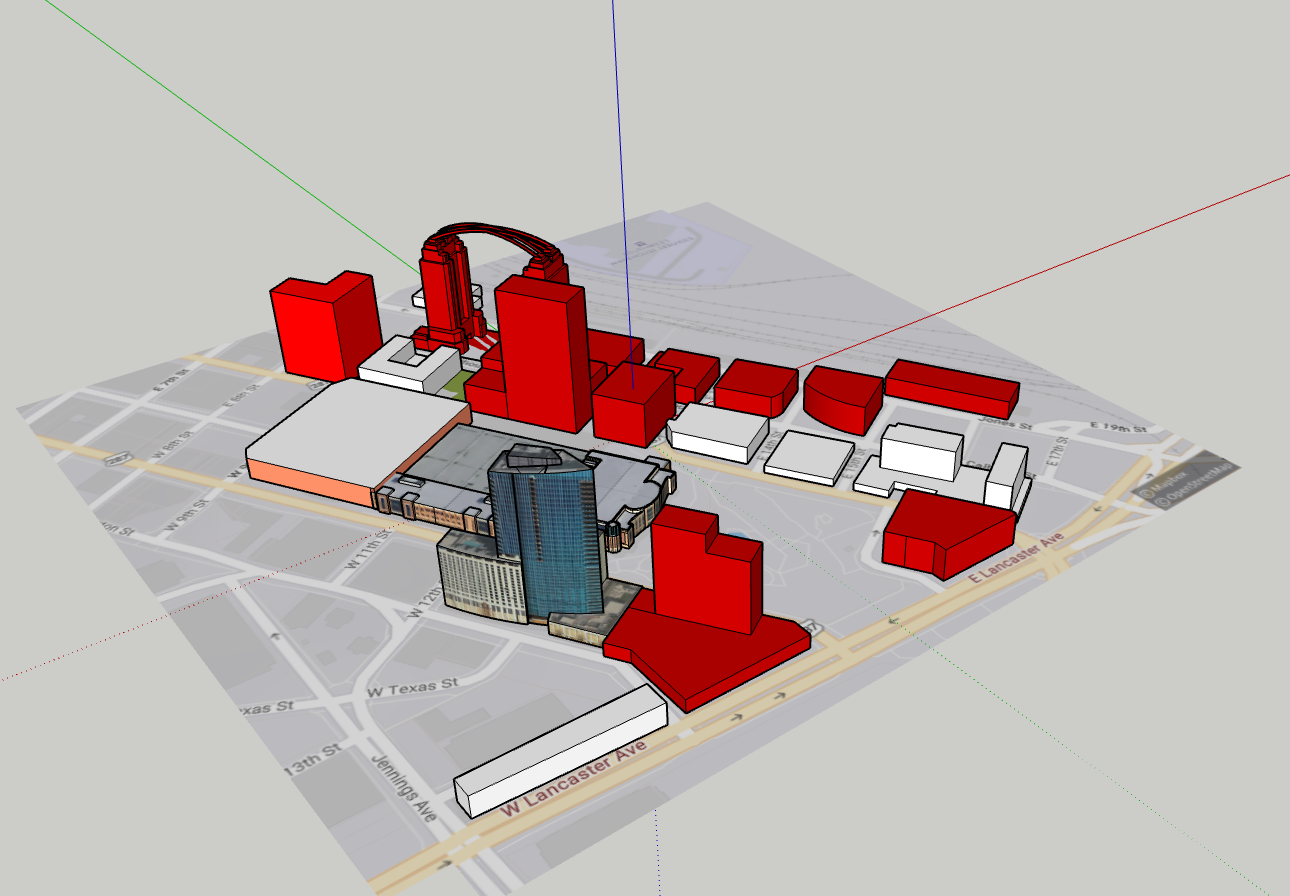 Like I said, many of the red blocks are either my idea or proposed or under construction right now.

Planned:
- The Texas A&M Law buildings
- The Omni expansion
- Commerce St. C.C. Hotel & garage directly to the south of it

Under Construction:
- The Deco (901 Commerce)

Those remaining three blocks (well, two... the one touching Lancaster would be a split for the Red Line LRT) is something I haven't really thought of too much. 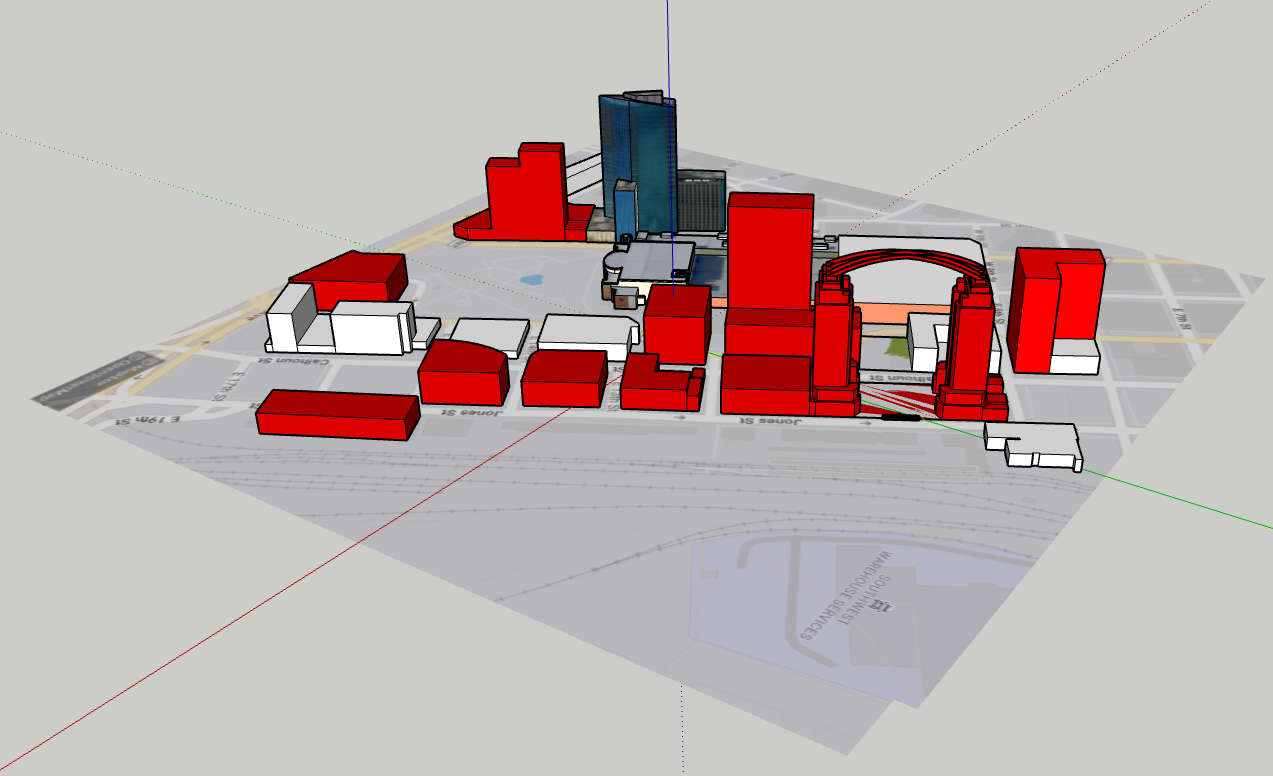 I know many of you have seen that idea here before, but it's a bigger version of that same idea as an eastern expansion for Central Station made primarily for rail. Like the Central Station in Berlin, my idea would have retail/restaurants above a multi-level train station, although as I showed in my rail maps, the Red light rail line would be above ground, following Jones & Calhoun (as you can see an LRT vehicle for reference, above) and the Blue and White lines are underground. Originally, the towers weren't that tall, but I like 'em better this way. The towers would also be mixed use... residential, hotel, office, etc.

1551 Commerce
Because it's right across the street from what would be the TAMU Law campus, I thought about this strip being a residential building. But since it's also near Central Station, maybe add some hotel/Airbnb type elements as well. Because this is the hub of transit, my main focus of this area would be convenience and rest, so if there was some kind of new development on this strip of land, I'd use it more for residential and hospitality.

That Korner Store is permanently closed, I believe, so I'd have no problem getting rid of that section of the block. The Bar Association, on the other hand, would need a new building. I feel like it should be closer to the Courthouse and there has to be some office space within a couple blocks available. As for my idea, I'd want it to be some form of entertainment... maybe even a theater... maybe a return of the old Majestic Theater. Or maybe something complementary to the bar and distillery that I'd plan to keep there.

Water Gardens expansion
Keeping it short and simple... either expand it for more office space or make it the new Central Library. 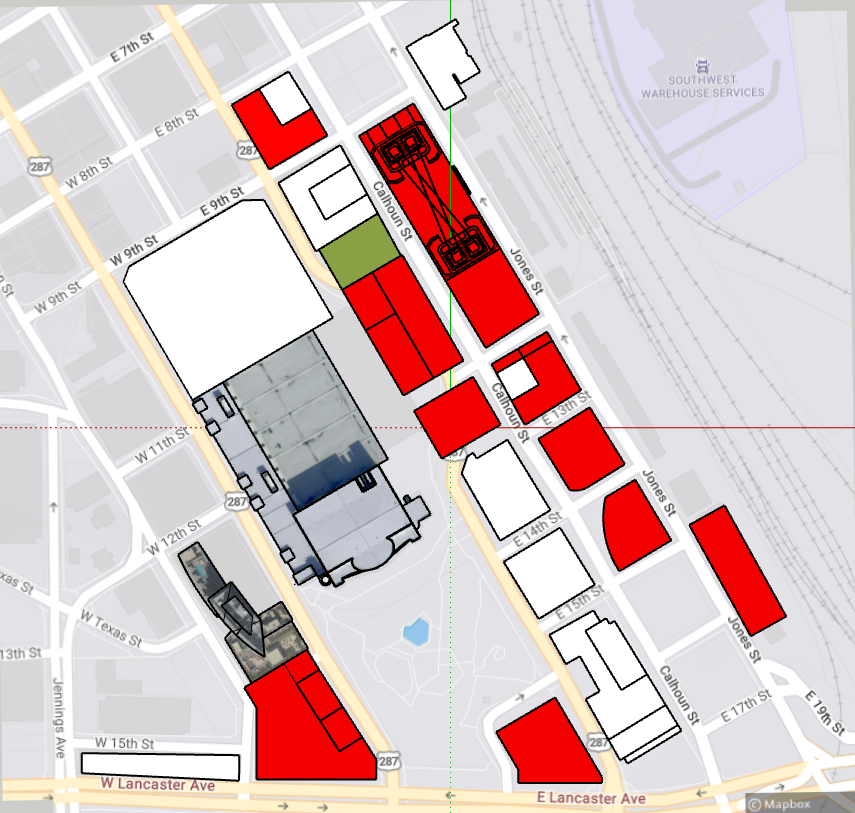 As far as the little greenspace I planted between Hampton Inn and the planned new Convention Center hotel, I want to take the small utility building on 1011 Commerce (at least, I think that's what it is) near the Hampton Inn that still has the old Convention Center pattern and actually take those concrete panels as a design element for the small park/plaza. It would act sort of as a more quiet link between Central Station and the Convention Center.

Back to Ideas and Suggestions for Projects

1 user(s) are reading this topic